Leeds and Swansea played out an exciting two-all draw at the Liberty Stadium on Tuesday night. I don’t think it would be harsh to say but the Leeds side from last season would have capitulated and lost that game. However, it appears that this team possess a more significant amount of mental toughness compared to previous Leeds teams. Swansea dominated the first thirty minutes but Marcelo Bielsa made some shrewd tactical adjustments, and Leeds went in at half-time level. Despite conceding early in the second half, Leeds persevered and ended up taking a valuable point away from home.

Below are my thoughts on the draw:

Bielsa Changes:- This was the worst Leeds performance so far this season. The loss of Liam Cooper was a huge blow just before kick-off. Leeds lacked the intensity and composure on the ball which have been hallmarks of their first four wins of the season. Leeds went into the game without picking up any yellow cards. In the first half alone, they received three yellow cards and four overall. 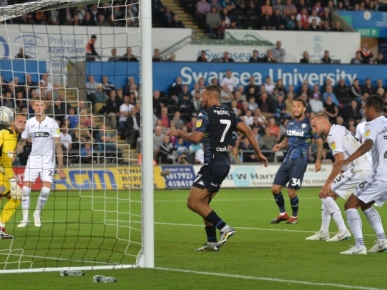 Kalvin Phillips looked nothing like the commanding presence he had portrayed in the first three league victories. He seemed out of sorts and was the first player booked. Bielsa showed he will not shy away from the big decisions and replaced his sitting midfielder with Lewis Baker four minutes after the first Swansea goal. “El Loco” is evidently not prone to sentimentality and is ready to make the tough calls anytime during the game. By making the early substitution, he clearly showed his squad that no-one can rest on their laurels. The introductions of Harrison and Bamford in the second half were crucial in Leeds claiming a share of the spoils. Over the past 5 seasons, Leeds would have never shown the mental strength to grab a share of the spoils. Did Leeds deserve a point? Maybe not, but that’s why we pay Bielsa £2 million a year. His tactical alterations kept the unbeaten run going.

Resilience:- Marcelo Bielsa and his staff deserve immense credit for giving this Leeds squad a much-needed boost to their mental toughness. Losing your captain before the game and conceding a goal in the first fifteen minutes could have seen the team fold like past few seasons. Instead, we saw a newfound resoluteness inspired by the confidence Bielsa and his staff have instilled in the squad. Tuesday night’s draw was the first game since Brighton in 2012, where a Leeds side came from behind twice in the same game. I believe this to be the most impressive takeaway from the game. With the likes of Cooper, Forshaw and Jansson to return from injury, I am firmly convinced that this squad now possesses the necessary belief and self-confidence which has been distinctly lacking for the past few seasons.

Shackleton:- Jamie Shackleton was superb in his first league start for Leeds. Perhaps the late call-up to replace Liam Cooper meant he did not have time to be anxious. He definitely showed no signs of nerves and produced a fearless display. The incisive run and cross for Kemar Roofe’s goal proved the massive potential of this young player. Shackleton’s overall performance showed that Bielsa is inspiring his players not only to give their all for the team but also not to be afraid to showcase their skills on the ball. The future looks bright for the young academy graduate. Hopefully, he will not suffer the same delusions of grandeur that afflicted Sam Byram and can play a crucial role in the club over the next few years.

Swansea Tactics:- Graham Potter’s tactics and game plan stifled Leeds in the first half of the match. I saw his Osterunds side play a few times in the Europa League where he showed he can be tactically astute and set up his team to blunt his opponents. Potter is the first manager this season to put a system in place that put Leeds under real pressure. I would not be surprised if Swansea ends up finishing fighting for a play-off place at the end of the season.

Norwich:- The Leeds squad face another tricky away game at Carrow Road on Saturday. I firmly hope that either Pontus Jansson or Liam Cooper will be fit enough to be part of the squad. Leeds lacked the physicality to handle Oliver McBurnie. I highly doubt that he would have scored his second goal if Cooper or Jansson had started the game. Norwich will be fully aware that Leeds might struggle against a dominant centre-forward. Despite Jamie Shackleton’s excellent display, I would much prefer to have the defensive solidity of Luke Ayling at right back against Norwich. Marcelo Bielsa lamented the fact that Leeds did not defend well at Swansea and it is an area that must improve if we plan to come away with a good result at the weekend. Patrick Bamford will be pushing for a start, but barring injury, I can’t see Bielsa dropping his top scorer. The manager, his staff and the players should be buoyed by Tuesday’s performance. I think that they answered the question of how they would react to falling behind in a game.

History was made at Elland Road on Saturday, as Marcelo Bielsa became the first Leeds United manager/head coach to win his first four games in charge. In truth, it was a scrappy win, but it keeps the run of victories rolling on, which was the primary objective before the game. Leeds has two huge away games against Swansea and Norwich coming up next week. It will be the first time Bielsa and his staff will have experienced the two-match week in the Championship. The signs look good that Leeds and Bielsa are ready for the challenge.

Here are my views on the win over Rotherham:-